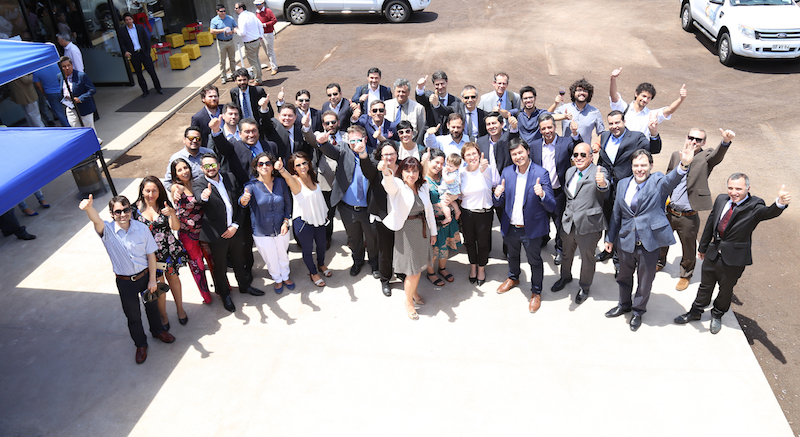 In August 2017, Corfo approved the funds for the implementation of AtaMoS-TeC Project (Atacama Module and System Technology Center), which will develop technologies for the industry of photovoltaic solar energy in Chile as a strategic plan for sustainable growth in the country.
AtaMoS-Tec is a proposal from SERC Chile, which will be executed, as beneficiary, by Universidad de Antofagasta. As collaborating entities, three recognized foreign institutions will participate: CEA INES (France), ISC Konstanz (Germany) and Fraunhofer Chile. As associates, there is a group of companies that will contribute with sponsorship and relevant teamwork. These are Adrox Spa, Borg, Cintac, Colbún, Ecoenergías, Ecovisión, Fotcast, Geogrow Spa, Innova Renovable, Mondragón, New Energy, Novalquimia, Phibrand S.A., Snare, Solarpro, Solcor, Syntec, Tecno Andina, Venergía and Vidrios Lirquén S.A.
The official launch of AtaMos-Tec took place on January 19th 2018 in Antofagasta. The temporary board of directors will be in charge of the project until the creation of the consortium that will manage it during the next years of development. It will consist of a representative from SERC Chile (its director, Rodrigo Palma); a representative from Universidad de Antofagasta (Edward Fuentealba) and a representative from CEA INES (Delfina Muñoz). The industry agreed, unanimously, that its representatives in the board will be Jose Antonio Aguirre, from Sintac; Carlos Jofre, from Laboratorio Solar and Juan Eduardo Vasquez, from Colbún. The chairman will be Edward Fuentealba, and Barbara Silva will be its executive director.
Professionals and researchers from all institutions have worked hard for more than a year on this proposal which was nominated to receive funding from Strategic Investment Fund (FIE from its acronym in Spanish). As part of the road map of the Strategic Solar Program created in 2015, this proposal aims to promote the creation of a local solar industry to improve the productivity in the country. The competitive allocation of funds for this initiative is notable, becoming the most relevant R&D project in solar energy that has originated in Chile. This is due to the important amount of resources that it will manage – with key public and private contributions – and for what it aims to contribute in the new scientific and technological knowledge in solar energy.