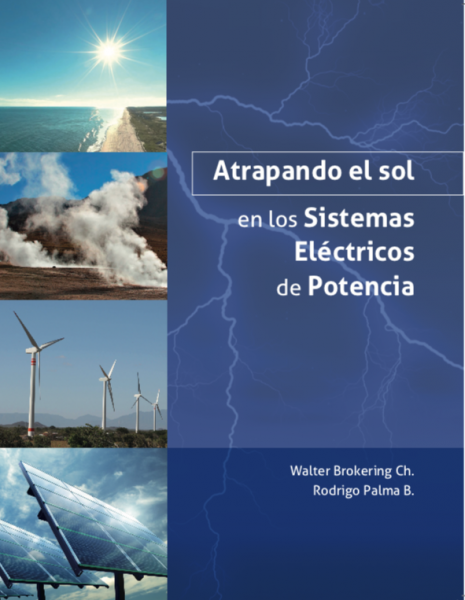 The first edition of the book “Apuntes de Sistemas Eléctricos de Potencia” (“Notes on electric power systems”), by Professor Walter Brokering, was published in 1978. In 2008, there was an updated reissue, “Ñom Lüfke, o el Rayo Domado” (“Ñom Lüfke, or the Domed Ray”), which Brokering wrote with two other professors from the Department of Electrical Engineering at University of Chile, Drs. Luis Vargas and Rodrigo Palma Behnke, director of SERC Chile.

The third version has recently been launched, adapted and updated, with a title consistent with our new reality: “Atrapando el Sol en los sistemas eléctricos de potencia“ (“Catching the sun in power systems”), by Walter Brokering and Rodrigo Palma Behnke. It is a web platform, interactive and free, which aims to help the training of hundreds of Electrical Engineering students in Latin America, as happened with hundreds of others who have used this text for years, known as “The Brokering”. The address of the platform is sepsolar.centroenergia.cl

Among other reasons for this third edition, the authors highlight that there are few texts in Spanish that apply to our realities, that facilitate university teaching and empower the training of new professionals and that allows them to overcome the existing dissociation between the theoretical criteria with those that should plan and operate Electric Power Systems (SEP) and the practical reality in which the Competitive Electric Markets (MEC) are developed.

“The pretense of this text” -the preface says is “to remind all those interested in power systems of their basic characteristics, the physical and economic rules that govern their behavior, in order to respect them and consider them adequately in the planning of new facilities and in the operation of existing ones, and on the other hand, to present the bases of the economic theory that are intended to apply to a sector that constitutes a natural monopoly and that exchanges many products of dissimilar commercialization (active and reactive power, at peak and off-peak hours; energy, management of reservoirs of different capacities, frequency regulation, availability, reserve and mutual support, etc.), theory that is to a certain extent in evolution, and where it is clear that a text that adequately presents it is lacking”.

The website brings together multimedia applications that help to deepen the knowledge presented in the different chapters and incorporates an unrestricted version of the DeepEdit program for SEP simulations, which includes the networks of some countries, such as Chile, Colombia, Bolivia and Argentina.