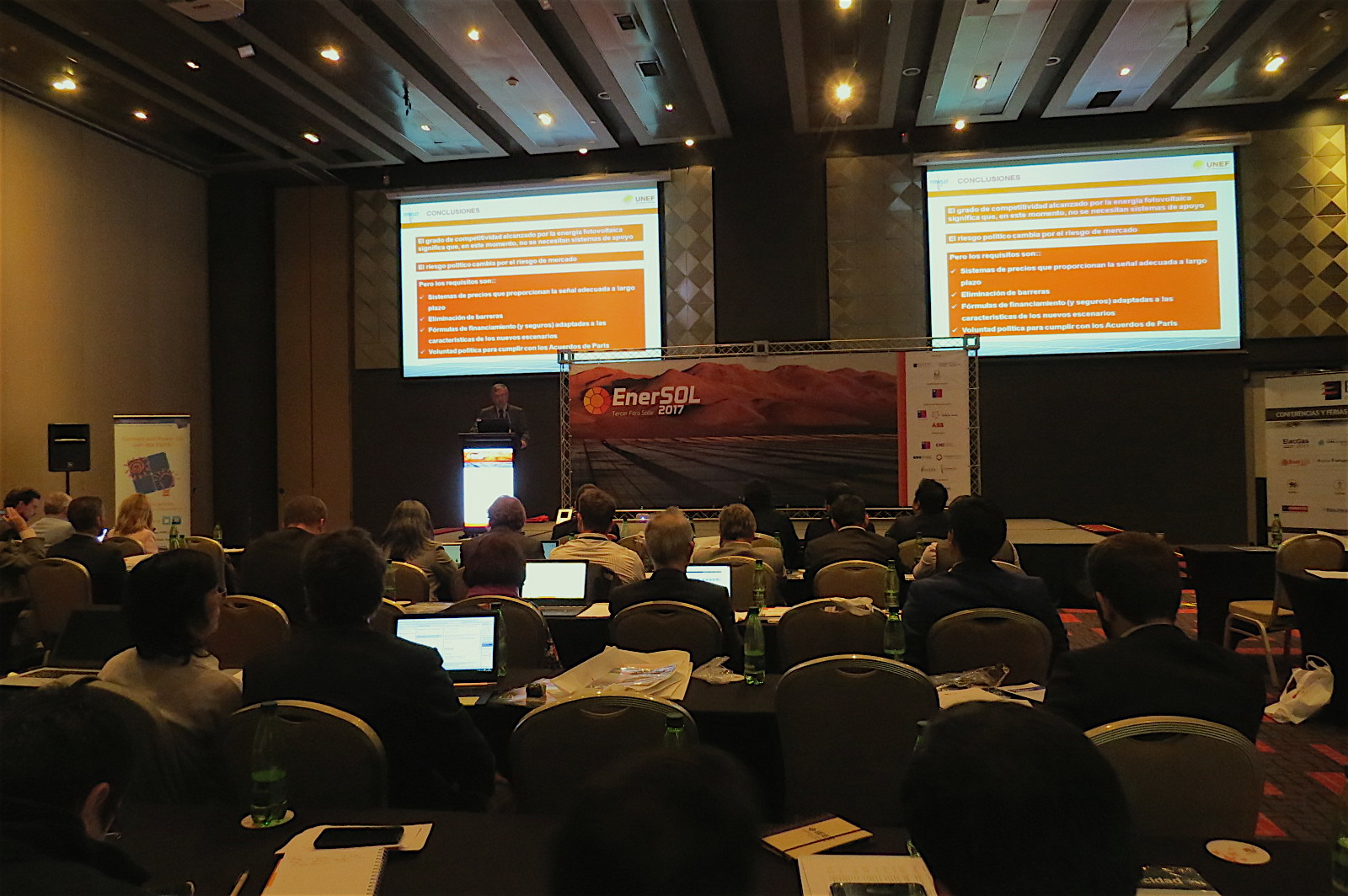 The solar Enersol 2017 forum, which is organized by SERC Chile together with the editorial group Editec, considered excellent presentations and had an interesting number of participants.

During the 5th and 6th of October, 12 speakers addressed the audience at the Enjoy Hotel in Antofagasta, Chile, with relevant topics regarding the photovoltaic industry, its future challenges, its presence in the market and its application in solar farms.

On Tuesday 5th, Professor Samir Kouro, representative of SERC Chile, opened the conference highlighting the importance of this forum as the sole debate on solar energy carried out in the country. Iris Olivarez, Energy Undersecretary in Antofagasta, also highlighted the solar potential of the region. At the closing lecture of the day, almost eight hours later, Rodrigo Mancilla, CORFO’s director for the solar committee, spoke about a promising future for this type of energy thanks to the Solar Strategic Program.

The different lectures at Enersol 2017 were:

Ana Maria Ruz, director of technological development in the solar energy committee at CORFO, who presented the program from the International Energy Agency on Photovoltaic Power Systems (IEA PVPS);

Gaetan Mason, director from the Becquerel Institute Content & Strategy, who described the development of photovoltaic market;

Izumi Kaizuzka, manager at RTS Corporation, with a presentation on the trends in the photovoltaic market;

Jose Donoso, general director at the Spanish National Photovoltaic Association (UNEF from its Spanish acronym), who spoke about the opportunities and challenges that abound in the integration of renewable energies in the market;

Wei Nee Chen, chief corporate officer for the Sustainable Energy Development Authority in Malaysia, who presented on the development of the photovoltaic market in her country;

Gabriel Guimaraes, O&M coordinator at the Portuguese Efacec, told the audience about the installation of Jama Solar farm and spoke about its challenges;

Marcelo Matus, deputy director at the Energy Center of Universidad de Chile, presented the project to measure the solar spectrum of the Atacama Desert;

Javier Batlles, professor at Universidad de Almeria, lectured on the evaluation of solar resources in zones with a complex topography and its application to the generation of maps of solar radiation;

All lectures are available in the following link